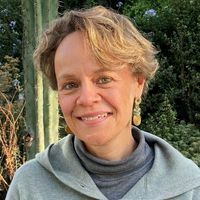 Renée González Montagut obtained her B.S. degree in 1990 from Occidental College with a major in Biology (Cum laude) and a full scholarship. After conducting research in Panama, Costa Rica and Venezuela, she focused on rainforest regeneration in cattle pastures in Mexico for her doctoral dissertation. She was awarded the National Science Foundation Doctoral Dissertation Improvement Grant and obtained her Ph.D. in 1996 from Harvard University, where she taught five courses. In 1997 she started working for the Mexican Fund for the Conservation of Nature (FMCN) as the Director of the Fund for Protected Areas (FANP). In 1998 the FANP started channeling the yearly income generated by an endowment from the Global Environmental Facility (GEF) through the World Bank to ten protected areas. By 2022 the endowment has grown with donations from 23 additional donors. A total of 53 federal protected areas receive support from FMCN. In 2004 Renée became the Conservation Director of the FMCN. She was responsible for the operation of the Protected Areas, Forest, Watersheds and the Marine and Coastal Conservation Programs, as well as inter-program initiatives. Under her leadership, in 2013 the FMCN signed the GEF grant for the conservation of coastal watersheds project, which is the largest GEF investment in Mexico, and was recognized as best practice in 2019 by GEF and in 2020 by the World Bank. In 2019 Renée led the accreditation of FMCN by the Green Climate Fund (GCF) as the first direct access entity in Mexico. In 2020 she became the General Director of FMCN. In 2021 the GCF approved the first project for Mexico presented by FMCN, while the GEF approved FMCN´s request for a fourth grant and the German Development Bank authorized the third endowment contribution to FMCN. Renée is a founding member of the Mexico Chapter of the Ecological Society of America, the Harvard University Mexican Association, and the Women in Nature Network. She was part of the Governing Board of the Institute of Ecology and Pronatura. She led the creation of four regional private environmental funds and helped in the design of state funds. Renée is fluent in four languages.